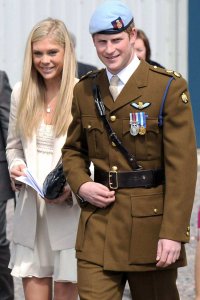 Does the upcoming royal wedding have you feeling all romantic? Well, you may not be the only one.

According to British tabloid The Sun, Prince Harry and his sometime girlfriend Chelsy Davy reunited at a trendy London nightclub called Beauford House this past Saturday. Apparently they left together in the trunk of a Jaguar at 4 am.

Davy, who was born in Zimbabwe, has been traveling in Africa for a few months to celebrate the end of her law studies.

Now she’s back in Great Britain to finish training at a London-based law firm. Now that she’s locational-y desirable again, will the two get back together?

Well, one can’t always trust the tabloids, but reports say that Prince Harry has invited Davy to be his plus-one to the Prince William and Kate Middleton April 29 wedding. The two broke up in November after dating for five years.

So what do you think? Is there a wedding date in Chelsy Davy’s future?

You know what the sitcoms tell us about those, don’t you?