Kelsey Grammer has reached a divorce settlement with Camille Grammer, freeing the actor to marry again. 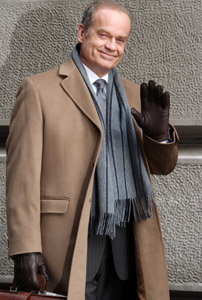 Kelsey Grammer has reached a divorce settlement with his Real Housewives of Beverly Hills ex Camille Grammer, which will allow him to marry his mistress in an already-planned quickie wedding.

Kelsey and his betrothed, Kayte Walsh, already have the Plaza Hotel booked for their pricey nuptials at the end of February — the only thing holding them up was that pesky divorce decree that Camille refused to sign off on because the money part wasn’t settled.

Now Kelsey and Camille have come to mutually agreeable financial terms — definitely in Camille’s favor — and their divorce should be finalized as early as Thursday.

The only loose end is Camille’s share in Kelsey’s retirement pension, but the actor agreed to give her a $2 million security deposit on it until those final details can be worked out. That’s on top of the $50 million the reality star stands to garner in the huge divorce settlement.

Not bad for thirteen years of marriage to a guy you barely ever slept with.