Glee‘s post-Super Bowl episode took it to the field with the McKinley High football team playing for the championship while Michael Jackson’s Thriller served as inspiration in a stellar mash-up.

With the McKinley High football team embroiled in a run for the title while the Cheerios’ shot at regionals looms, Glee put on a post-Super Bowl episode with thriller moves and a Katie Couric guest-starring turn. 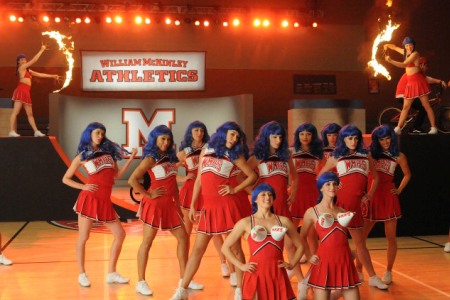 The Glee cast’s transformation into Michael Jackson Thriller zombies made the episode’s big budget worth it. How did the entire cast wind up singing and dancing Thriller on the football field? Well, after getting sick of the football players and glee club members fighting, Coach Beiste and Mr. Schuester (Matthew Morrison) decide to force the football team to join glee club for one week. Their plan is to make them come together and force them to learn from their ignorance.

Meanwhile in Sue Sylvesterville, even her precious Cheerios’ performance of Katy Perry’s California Gurls — complete with blue wigs and bra-sparklers — couldn’t inspire Sue Sylvester. Sylvester (Jane Lynch) decides she has to top herself after six straight cheerleading championships with a secret weapon that will surely have her Cheerios winning — a cannon. She intends to shoot Brittany (Heather Morris) out of a cannon for the team’s routine — but she’s blocked.

The principal and Mr. Schue shut down her chance to launch Brittany, so she takes it out on glee club by switching the cheerleading regionals to the same night as the big McKinley High championship football game. That means the Cheerios must choose between performing at the halftime show or winning another cheerleading title. Coach Beiste won’t let the football players play without doing the show, so they quit. That means the team would be short which would cause a forfeit. 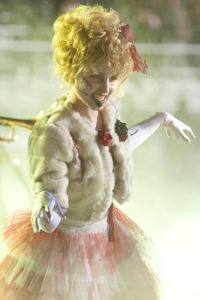 In an effort to keep McKinley High in the championship game, avoiding a forfeit, the girls of New Directions volunteer to join the team. In the immortal words of Rachel Berry (Lea Michele): “Let’s kick some ass!”

The big game opens with Tina taking a hard hit for the team that makes Finn realize he has to do something — get the cheerleaders back and put on the halftime show. He convinces the girls to do what’s right while Puck calls out the quitters on the football team and convinces them — minus Karofsky — to perform at the halftime show in order to get back into the game and win it.

The Thriller number everyone’s been waiting for may go down in Glee history as one of their best. Picture an entire football field filled with zombie football players, cheerleaders and glee clubbers! It was brilliant and even brought Karofsky to his senses! They nailed their perfect Thriller moves that would have made Michael Jackson proud!

With 10 seconds left in the game, the McKinley High football team freaks the other team out with zombie antics, forcing the opposing quarterback to fumble the ball and allowing McKinley to run it in for a touchdown.

To end an epic Glee episode, creator Ryan Murphy rolled out Katie Couric for an interview with Sue Sylvester as the loser of the year — reading off a list of people she beat out including Brett Favre’s cell phone! She informs Sue Sylvester that the remainder of the Cheerios budget will be going to the glee club.

What did you think of Glee’s post-Super Bowl episode?