Christina Aguilera forgot the words while singing The Star Spangled Banner at the opening of Super Bowl XLV. 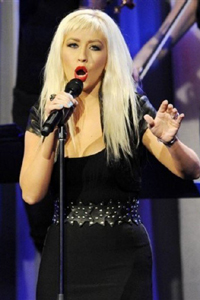 The national anthem is not an easy song to sing, but you would think five-time Grammy award winner Christina Aguilera would nail it. Her voice sounded great, however, less than a minute into the song she flubbed the words in front of the crowd at the Super Bowl and hundreds of millions across the globe.

Instead of singing the lines, “O’er the ramparts we watch’d, were so gallantly streaming,” — she sang the same line she already sang, which was: “What so proudly we watched at the twilight’s last reaming.”

She had previously told reporters that she had been singing the song since she was a little girl, so her nerves must have gotten the best of her at the Super Bowl. “I have been performing the anthem since I was seven years old and I must say the Super Bowl is a dream come true,” she said in a statement January 24.

Aguilera seemed to have caught her mistake, but made up for it with multi-octave notes and showing off her wide range.

Deion Sanders quickly took to her defense, tweeting: “Y’all leave Christina alone I was just informed that was the remix. The nfl was running behind so she was sweet enough to help us out.”