The Situation wants to leave Jersey Shore in pursuit of a movie career. 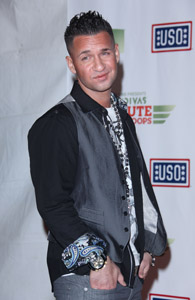 Mike Sorrentino wants to change his situation — the Jersey Shore star hopes to leave the small screen in pursuit of a movie career.

“Hopefully by the end of the year I’ll be in a movie,” he told E! “There’s only so long you can rule the reality world.”

“Maybe another year or so of reality, and then I’m gonna graduate to movies,” the fledgling thespian said. “It’s like Michael Jordan. There’s only so long you can keep winning them rings.”

“You gotta move on and try something different,” the ever-humble reality star continued. “I love to be in front of the camera; I love performing; I love entertaining so movies is definitely the next step.”

But not to worry Jersey Shore fans — Sorrentino will definitely be back for season four, in which the pals will bring their shenanigans to Italy and humiliate all Americans.

The Situation is taking his season prep very seriously. “I’m actually gonna get me some Rosetta Stone,” he said. “I got two months to learn it. My name comes from Italy so I’ve got a little bit of heritage there. Plus maybe I can get a hometown Italian chick.”

He’s got a better chance of getting some play in Italy than he does of achieving big screen success but stranger things have happened in Hollywood.