While Camille Grammer is still deciding whether or not she will appear on the next season of The Real Housewives of Beverly Hills, another city is calling her name: New York. 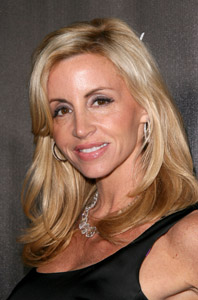 Camille Grammer is considering an offer to appear on The Real Housewives of New York, despite her uncertain status on the Beverly Hills version of the franchise.

If Camille opted to take on New York, it would be on a guest star basis, not as part of the regular cast.

“Camille’s life is in California. She wouldn’t consider uprooting her children and moving them to New York City so she could be a part of a reality show,” a source close to the reality star told RadarOnline.

“She would consider making a guest appearance or several appearances on the New York franchise but it would have to be done in a way that wouldn’t disrupt Camille’s schedule with the children. They are her number one priority, period.”

Her one stipulation? Some big changes in the editing room.

“It bothers Camille that the producers and execs at Bravo want to bring her on the show to stir up the pot,” said the insider. “Camille doesn’t want to be known as that ‘mean’ girl anymore.”

Interesting that Camille wants to spend time in the same city where her soon-to-be-ex Kelsey Grammer and his soon-to-be-new-wife live, no?