Director Steven Soderbergh has been slapped with a paternity suit, much to the displeasure of his wife Jules Asner. 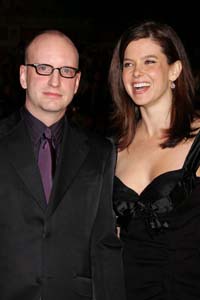 Oscar-winning filmmaker Steven Soderbergh was slapped with the suit by an Australian woman who claims he fathered her now-five-month-old daughter during an affair in December 2009.

The biggest fly in this ointment? The fact that Soderbergh has been married to former Wild On host Jules Asner since 2003.

According to court documents, Frances Lawrencina Anderson claims she and the Traffic director got it on “on many occasions covering all possible dates of [conception]…and as a result thereof, she became pregnant.”

Soderbergh “has acknowledged that he is the father of the child verbally and by offering to pay various medical and other expenses incurred by [Anderson] in relation to the pregnancy.”

A source close to the couple says that they were separated during the time Soderbergh and Anderson hooked up and that he has been trying to make it up to Asner ever since.

“Steven really felt like he was trying to do the right thing and being very generous,” the source says. “They’ve been trying to settle this for almost a year.”