Hugh Jackman is packing on the pounds in preparation for the newest installment of the X-Men franchise. 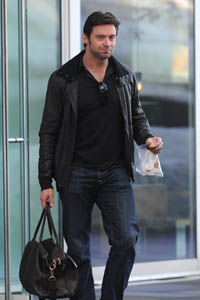 Hugh Jackman is usually slim and trim, but The Wolverine actor is packing on the pounds to create an even more monstrous superhero than ever before.

Jackman says he is bulking up to epically muscular proportions.

“It’s 6,000 calories a day, it’s rough,” Jackman told the LA Times. “Right now, I’m at 210… I was 190 [in the last movie], something like that. I don’t know how much I want to give away about it, but Darren [Aronofsky] said with the last one, ‘Hey you looked great, but you’re so tall that in those long shots you looked kind of like Clint Eastwood, and that’s not Wolverine.’ He said that Wolverine, in the comics, is powerful, stocky, you know, he’s short and thick. So he said, ‘I want you to go there, get bigger.'”

“…He’s thick and it’s chunky and it’s powerful. I always think of Mike Tyson when he first came on the scene,” Jackman explains. “Sometimes, he was a full foot shorter than his opponents and bent over [with this] massive build. There’s real power. You said bulldog, and that’s it exactly. Exactly. That’s what I’m going for, and if I have a massive heart attack first, well, you tell everyone what I was going for.”

The Wolverine is currently in pre-production and scheduled for a 2012 release.

read on for more hugh jackman