2011 could turn out to be the year of the female author. Between the buzz on eReaders like the NOOK and Kindle and the amazing line-up of new books coming from new writers and seasoned favorites, we’re salivating over books in all their forms! SheKnows asked two fabulous women — Melissa Senate, popular women’s fiction author of The Love Goddess’ Cooking School and Liz Fenton, popular book blogger from Chick Lit is Not Dead — to share their must-reads for 2011. 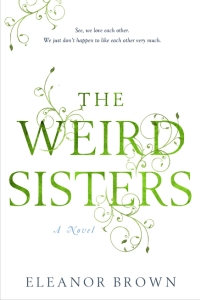 “You know when you hear about a book and it sounds sooo good and interesting that you can’t wait to read it? These five debut novels have been on my pre-order list for months and now they’re finally out or coming out,” said author Melissa Senate.

1. The Weird Sisters by Eleanor Brown (January)
The Andreas sisters were raised on books — their family motto might as well be, “There’s no problem a library card can’t solve.” Their father, a renowned, eccentric professor of Shakespearean studies, named them after three of the Bard’s most famous characters: Rose (Rosalind — As You Like It), Bean (Bianca — The Taming of the Shrew), and Cordy (Cordelia — King Lear), but they have inherited those characters’ failures along with their strengths.

Now the sisters have returned home to the small college town where they grew up — partly because their mother is ill, but mostly because their lives are falling apart and they don’t know where to go next. Rose, a staid mathematics professor, has the chance to break away from her quiet life and join her devoted fiance in England, if she could only summon up the courage to do more than she’s thought she could. Bean left home as soon as she could, running to the glamour of New York City, only to come back ashamed of the person she has become. And Cordy, who has been wandering the country for years, has been brought back to earth with a resounding thud, realizing it’s finally time for her to grow up.

The sisters never thought they would find the answers to their problems in each other, but over the course of one long summer, they find that everything they’ve been running from — each other, their histories, and their small hometown — might offer more than they ever expected.

Praise: “Brown’s knockout debut about the ties that bind us, the stories we tell ourselves, and the thorny tangle of sisterhood was so richly intelligent, heartbreakingly moving and gorgeously inventive, that I was rereading pages just to see how she did her alchemy. Brilliant, beautiful, and unlike anything I’ve ever read.” — Caroline Leavitt, author of Pictures of You. 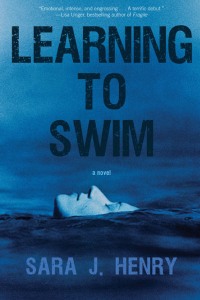 “If I’d blinked, I would have missed it. But I didn’t, and I saw something fall from the rear deck of the opposite ferry: A small, wide-eyed human face, in one tiny frozen moment, as it plummeted toward the water.”

When she witnesses a small child tumbling from a ferry into Lake Champlain, Troy Chance dives in without thinking. Harrowing moments later, she bobs to the surface, pulling a terrified little boy with her. As the ferry disappears into the distance, she begins a bone-chilling swim nearly a mile to shore with a tiny passenger on her back.

Surprisingly, he speaks only French. He’ll acknowledge that his name is Paul; otherwise, he’s resolutely mute. Troy assumes that Paul’s frantic parents will be in touch with the police or the press. But what follows is a shocking and deafening silence. And Troy, a freelance writer, finds herself as fiercely determined to protect Paul as she is to find out what happened to him. What she uncovers will take her into a world of wealth and privilege and heedless self-indulgence — a world in which the murder of a child is not unthinkable. She’ll need skill and courage to survive and protect her charge and herself.

Praise: “Emotional, intense, and engrossing, Learning to Swim is a terrific debut. The talented Sara J. Henry introduces a thoroughly modern heroine with an independent spirit and a tender heart. Readers will be cheering for Troy Chance as she deftly navigates the treacherous waters of betrayal and loss, and they’ll be looking forward to seeing her again when the book is closed.” — Lisa Unger, New York Times bestselling author of Fragile. 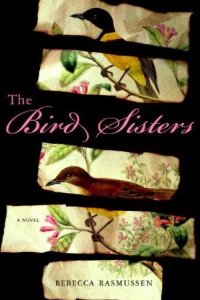 3. The Bird Sisters by Rebecca Rasmussen (April)
Love is timeless. So too is heartbreak. Whenever a bird flies into a window in Spring Green, Wisconsin, sisters Milly and Twiss get a visit. Twiss listens to the birds’ heartbeats, assessing what she can fix and what she can’t, while Milly listens to the heartaches of the people who’ve brought them. The two sisters have spent their lives nursing people and birds back to health.

But back in the summer of 1947, Milly was known as a great beauty with emerald eyes and Twiss was a brazen wild child who never wore a dress or did what she was told. That was the summer their golf pro father got into an accident that cost him both his swing and his charm, and their mother, the daughter of a wealthy jeweler, finally admitted their hardscrabble lives wouldn’t change. It was the summer their priest, Father Rice, announced that God didn’t exist and ran off to Mexico, and a boy named Asa finally caught Milly’s eye.

And most unforgettably, it was the summer their cousin Bett came down from a town called Deadwater and changed the course of their lives forever.

Praise: “A magical debut, original and poignant, lovely and moving. The Bird Sisters evokes the richly imaginative joys of childhood and the throat-aching betrayals and loyalties of being an adult. I absolutely loved The Bird Sisters and will carry Milly and Twiss with me as if in a locket for a long, long time.” — Jenna Blum, New York Times bestselling author of Those Who Save Us and The Stormchasers. 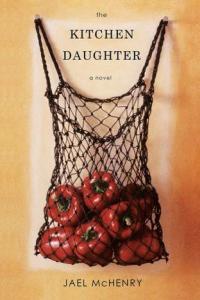 4. The Kitchen Daughter by Jael McHenry (April)
After the unexpected death of her parents, painfully shy and sheltered 26-year-old Ginny Selvaggio seeks comfort in cooking from family recipes. But the rich, peppery scent of her Nonna’s soup draws an unexpected visitor into the kitchen: The ghost of Nonna herself, dead for twenty years, who appears with a cryptic warning (“do no let her…”) before vanishing like steam from a cooling dish.

A haunted kitchen isn’t Ginny’s only challenge. Her domineering sister, Amanda, (aka “Demanda”) insists on selling their parents’ house, the only home Ginny has ever known. As she packs up her parents’ belongings, Ginny finds evidence of family secrets she isn’t sure how to unravel. She knows how to turn milk into cheese and cream into butter, but she doesn’t know why her mother hid a letter in the bedroom chimney, or the identity of the woman in her father’s photographs. The more she learns, the more she realizes the keys to these riddles lie with the dead, and there’s only one way to get answers: Cook from dead people’s recipes, raise their ghosts and ask them.

Praise: “For Ginny Selvaggio, the protagonist of Jael McHenry’s captivating debut novel, food is a kind of glossary and cooking provides its own magic, whether it’s summoning the dead or softening the sharp edges of a world she finds neither comfortable nor familiar. The Kitchen Daughter is sweet and bitter-sharp, a lush feast of a novel about the links between flavor and memory, family and identity.”  — Carolyn Parkhurst, New York Times bestselling author of The Nobodies Album. 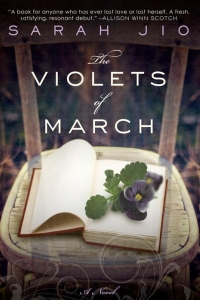 5. The Violets of March by Sarah Jio (April)
In a mystical place where violets bloom out of season and the air is salt-drenched, a heartbroken woman stumbles upon a diary and steps into the life of its anonymous author. In her twenties, Emily Wilson was on top of the world: She had a bestselling novel, a husband plucked from the pages of GQ and a one-way ticket to happily ever after. Ten years later, the tide has turned on Emily’s good fortune.

So when her Great Aunt Bee invites her to spend the month of March on Bainbridge Island in Washington state, Emily accepts, longing to be healed by the sea. Researching her next book, Emily discovers a red velvet diary, dated 1943, whose contents reveal startling connections to her own life.

Praise: “Mix a love story, history, and a mystery and what takes root? The Violets of March, a novel that reminds us how the past comes back to haunt us, and packs a few great surprises for the reader along the way.” — Jodi Picoult, New York Times bestselling author of Sing You Home and House Rules.

About Melissa Senate:
Melissa Senate is the author of 10 novels, including her debut, See Jane Date, made into a TV movie, and her latest, The Love Goddess’ Cooking School, one of More magazine’s food-themed books to eat up.

Senate is also a former fiction editor from New York City and now lives on the coast of Maine. For more, visit author Melissa Senate’s website.