Kate Hudson was spotted out and about in Paris giving us our first glimpse of her baby bump! 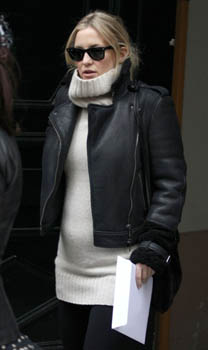 Kate Hudson is nesting in preparation for the birth of her second child. The actress was spotted shopping for furniture with mom Goldie Hawn and sort-of stepdad Kurt Russell in Paris, giving us a first look at her burgeoning baby bump!

Hudson is expecting her second child, this time with Muse lead singer Matthew Bellamy, and says this pregnancy is very different from her first with son Ryder.

“It’s a really different pregnancy from the last one, which is funny to me,” the 31-year-old told ITV1. “Then now I realize, wow, it’s been seven years, and I’ve totally forgot about what it’s like to have your body changing and moving.

“It couldn’t be a more opposite pregnancy. So of course everybody says, ‘Well, then that means you’re having a girl,’ but I don’t want to know.”

Kate Hudson is about four months pregnant and has been dating Bellamy since April 2010.