Charlie Sheen has issued a statement thanking his fans and Two and a Half Men coworkers while reports indicate the crew isn’t too happy about the show’s hiatus. 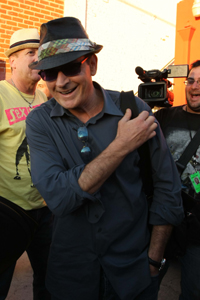 Charlie Sheen is speaking out for the first time in a statement provided to Access Hollywood via the actor’s rep Stan Rosenfeld. In the heartfelt statement, the troubled star addresses his fans and coworkers.

“I want to say ‘thank-you’ to my fellow cast members, the crew of Two and a Half Men, and everyone at CBS and Warner Bros., especially Les Moonves and Bruce Rosenblum for their concern and support,” Charlie Sheen’s statement begins. “To my fans, your good wishes have touched me very much.”

The Two and a Half Men star’s latest bout with rehab comes after a recent trip to the hospital after a reported 36-hour night of hardcore partying left Sheen with severe abdominal pain. The statement also comes on the heels of reports that some of the crew members aren’t too excited about Two and a Half Men’s hiatus — possibly because their pay might be stalled. There are no confirmations to these rumblings, however.

“I have a lot of work to do to be able to return the support I have received from so many people,” Sheen added in the statement. “Like Errol Flynn, who had to put down his sword on occasion, I just want to say, ‘thank you.'”

What do you think of Charlie Sheen’s statement? Will you stay loyal to the star while he cleans himself up?