Lindsay Lohan is being investigated for the theft of a necklace from a Venice, California jewelry store. 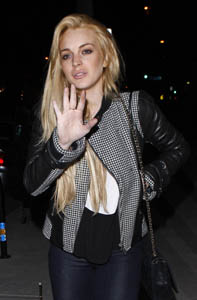 Lindsay Lohan is being accused of stealing a $2500 gold necklace from a jewelry store in her new neighborhood of Venice, CA — and the owner said she has video proof.

Lindsay said the accusation is bunk. Her story is that her stylist worked out a deal to borrow the necklace. The stylist didn’t return it on time and, she says, the owner way overreacted.

The owner isn’t having it. The case has been handed over to the DA, who will have to figure out if there was an intent to steal — central to any theft case. If it happened the way Lindsay says it did, it would be difficult to prove intent.

“Law enforcement believe the video will prove that the actress took the necklace, because it doesn’t, any any point, show her paying for the item.

“It’s the strongest evidence authorities have against the actress… if the video didn’t exist, she wouldn’t be in this precarious situation.”

If the DA decides to prosecute, it’s about a 100 percent certainty that Lohan will be headed to the slammer for violating her parole.