When we talked to Betty Anne Waters, the woman at the center of Conviction‘s true story, the first thing that struck us was how strong she was considering everything she had been through. Waters, with only a high school diploma, went to college and then law school all in an effort to free her brother who was wrongfully convicted of murder.

Conviction, the film, came to life under the sensitive direction of Tony Goldwyn and with the impeccable performance of Golden Globe nominee Hilary Swank. In our exclusive clip from Conviction’s home video release, director Goldwyn sits down with Betty Anne Waters to get the inside scoop from the film’s inspiration. 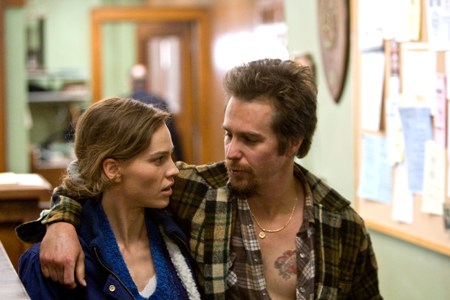 Betty Anne’s brother Kenny was convicted of murder in Massachusetts and sentenced to life in prison. After all of his appeals had been exercised without success, he tried to kill himself. In that act — which Betty Anne called “selfish” — she found the motivation to do something about freeing her brother beyond visiting him in prison and sending letters to the governor for a pardon.

In Conviction, the family’s harrowing story is brought to astounding life with a top-tier cast led by Swank as Betty Anne and supported by Sam Rockwell as her brother Kenny, Melissa Leo as a local sheriff who sought to convict Kenny, Minnie Driver as Betty Anne’s best friend and biggest supporter, and Peter Gallagher as the real-life trailblazing attorney, Barry Scheck.

Besides being a stellar story told with sensitivity, grace and power, Conviction is also a lesson in family and the bonds that are unbreakable, even when facing insurmountable odds.

Read on for more Conviction