Vanity Fair has revealed its 17th annual Hollywood Issue, bringing a taste of old Hollywood glam to the cover with stars like Anne Hathaway and Jake Gyllenhaal. 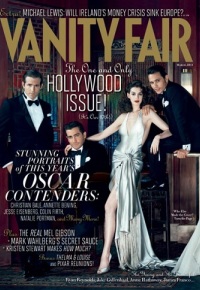 The 2011 Vanity Fair Hollywood Issue is glamorous to say the least. The issue shot by Norman Jean Roy features some of Hollywood’s hottest and most influential stars posing for the sophisticated cover and an inside spread.

Go-to girl Anne Hathaway looks stunning in a body draping gown on the cover while Jake Gyllenhaal, Ryan Reynolds and James Franco take dapper to a whole new level in stunning tuxes. The dominating foursome represents the issue’s cover perfectly but that’s just the beginning of the star-studded issue.

The 11 stars look Hollywood-chic in their award garb-best sitting on chairs and strategically interacting with each other.

In regards to the spread, the magazine said, “Vanity Fair went back to the basics — no teenagers, no penguins, no (full-on) nudity, just the most exciting actors and actresses of the moment.”

We can say cheers to that because it is a gorgeous look.

To check out the full Vanity Fair Hollywood Issue, grab a copy when it becomes available on February 3.

What do you think of the preview to the issue? Do Oscar nominees Jesse Eisenberg and Jennifer Lawrence leave you speechless in their formal wear?