“You have that Entourage moment,” Grierson said, describing his experience when James Cameron called him to direct Sanctum. Meeting Cameron is its own Entourage moment. He has helmed the two highest grossing films of all time — Titanic and Avatar. But, this is also the filmmaker who possesses vision beyond film to see how his prestige, perseverance and pop culture power can also change the world.

Sanctum is a thrilling underseas adventure, but at its heart it is a tale of a father and a son finding common ground after years of discord. 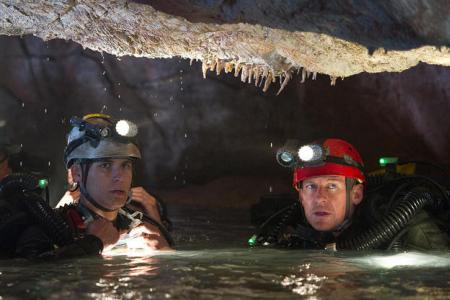 Richard Roxburgh and Rhys Wakefield play father and son respectively who are, with a team of adventurers, exploring underwater caves in Papua New Guinea. When a storm closes their exit, they must find a way out from the uncharted waters, caverns and worse that await them before finding their way out.

After seeing Sanctum, what’s so compelling about Cameron is even when it comes to his astounding success that began with Terminator and shot through Avatar (and the documentaries he has produced), one thing remains congruent — vision.

Sanctum is especially close to Cameron’s heart for two reasons. It is inspired by real events that happened to his filmmaker partner Andrew Wight and it pushes the boundaries of filmmaking in 3D as he established with Avatar.

The same cameras are used on the 3D Sanctum as the most successful film of all time. But, that’s the way Cameron wants it. In the end, the more film projects that use his 3D technology, the more the quality of the product for the audience elevates and that is the only legacy James Cameron yearns for himself. 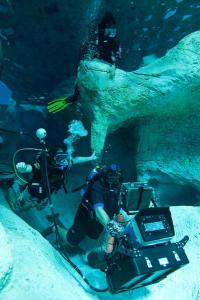 SheKnows: What appealed to you most about adding your name and talents to Sanctum?

James Cameron: We wanted to do a survival story. We were researching the psychology of survival before we crafted the story. We came up with the story — nobody sent it to us. It was based on something that had happened to Andrew. It was part of his life, but we jumped off from there to tell a fictional story. We’re not making any bones that this isn’t a work of fiction. It’s based in true events — both the things that happened to Andrew and incidents that happened on other cave diving expeditions. Everything you see happened to somebody, somewhere — maybe not all on the same expedition. In crafting the story, we studied the psychology of survival. We wanted to get into that thing that happens inside people where they have to adjust to a situation which appears completely hopeless. Some people are able to make that adjustment, others aren’t.

SheKnows: Is that where you seek the inspiration for thrilling, facing-death moments through your films?

James Cameron: Some people become more heroic than they could have imagined was possible for themselves. Other people who you think of as leaders could become quite cowardly or could implode. Everyone reacts quite differently. I think the appeal of this kind of movie for audiences in general is to test themselves against the circumstances of the film. “Can I hold my breath that long?” Here’s a little more abstract example: “If I knew I was slowing down the group, they would all die as a result of taking care of me, would I have the courage to sacrifice myself for the group?” People ask themselves these questions when they’re watching a movie like this in the safety of a movie theater because you never know when something bad could happen. God willing we all don’t have to experience anything as extreme as what happens in Sanctum, but I think that’s the appeal. 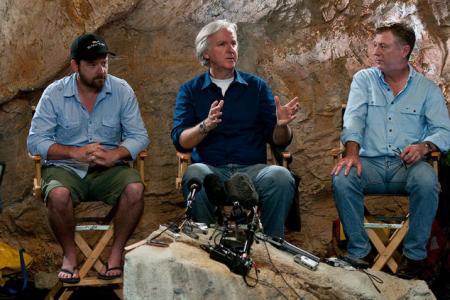 SheKnows: Where does that desire to see the darkness on screen for audiences come from?

James Cameron: I think that’s why we have nightmares. Our brain is running simulations to put us in jeopardy to see what we’ll do or to acclimatize us to that idea that something bad could happen. It’s just how human beings are wired because the entire time we were evolving we had to jump quickly or the leopard would get us or whatever it was. It’s Darwinian. 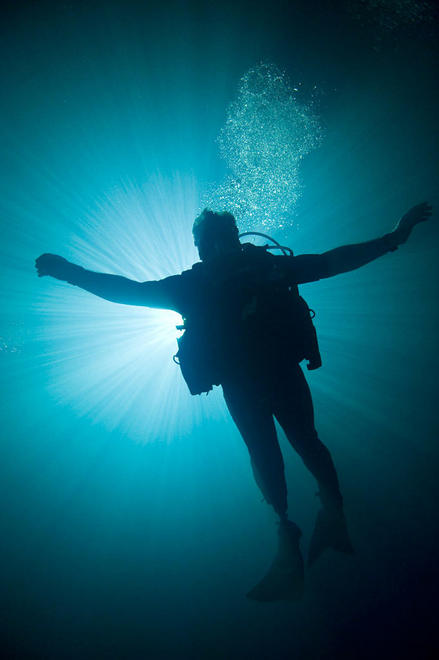 SheKnows: As deep as director Alister Grierson was shooting on Sanctum, were there any thoughts of putting creatures of the type that you’ve probably seen while exploring yourself?

James Cameron: We didn’t focus on that because we didn’t want it to be about animals and we didn’t want people to think we were leading toward a monster story [laughs]. We wanted to stay away from the supernatural, other than a couple shots of the New Guinean shaman just to give it a little bit of an aura, if you will. We wanted to keep clear of that and make sure that people understood that this was a human story, a human drama of people trying to survive in a hopeless situation.

SheKnows: Did you ever see any creatures that were awe-inspiring in your diving experiences?

James Cameron: Almost anytime you dive you’re going to see something you’ve never seen before. It doesn’t mean science hasn’t seen it before but the diver probably hasn’t seen it. If you’re observant, there will always be some critter you’ve never seen before [laughs]. Now when you dive in the really deep ocean like we did on some of our expeditions, you may see something nobody has ever seen before. And we did that. We actually imaged some creatures. When we came back and showed it to the marine biologists, they said, “We don’t know what that is. Sure wish you would have caught it.” I said, “It was seven feet in diameter. How were we going to catch it? It was bigger than our sub.”

SheKnows: Are there shipwrecks you still yearn to discover?

James Cameron: We love shipwrecks. There’s plenty of good ones still out there as well. Actually the Ed Fitz (Edmund Fitzgerald) is one that I’ve wanted to explore because we have the technology, the robotics, to go inside and map the interior and so on and we’ve already done that with the Titanic and Bismarck. It would be great to go look for the Indianapolis. I’d love to dive the Yorktown and the other Midway wrecks. The thing for me is I kind of had an epiphany over the last year that I could do that kind of exploration, which is really archaeology-history for the rest of my life and have great fun doing it. But, the aftermath of Avatar was that there was this really tremendous feedback from the environmental community and from the indigenous rights community that I had an opportunity to help them put a spotlight on issues. I thought, “Wow, there’s a whole mission in this.” I need to focus on that and quit exploring shipwrecks for a while, quite frankly. I also feel like, as a civilization, we’re really heading toward a cliff with issues of energy and climate change. These are things that have concerned me really for most of my adult life. So I thought if I’m going to do documentaries, it should be on those subjects. It should be something that’s actually doing some tangible good in areas that I’m deeply concerned about. So the shipwrecks are going to wait.

SheKnows: For Sanctum and other films, you have gotten your edge of the technological curve cameras out to other filmmakers… 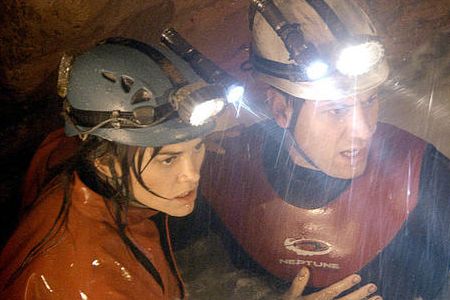 James Cameron: Every time my cameras go out on a movie, whether in this case it’s one of my own films I’m producing or other films, whether it’s Tron or the Cirque du Soleil thing we’re doing, or Ang Lee’s now shooting Life of Pi with a variant of the fusion cameras, and other filmmakers like (Martin) Scorsese using them, every time they go out we learn something new. Then we take what we learn and we put it into the next generation of the cameras. We’re constantly improving. It’s kind of like building a race car, racing it, then running back to the shop and working on the engine some more and tinkering with it to improve it. And we get a lot of feedback from filmmakers — we need this, we need that — or from directors of photography. So the cameras are getting better, smaller, lighter, smarter, doing more of the work for the crews. What I want to see is everybody to be able to use them and to make good 3D movies because that will lift the entire market. I don’t just want to be associated with a few good 3D movies and the audience is saying all of the other ones are crap. So it’s incumbent on me and my partner, Vince Pace, in the camera business, to spread ourselves as thin as we can to work with as many filmmakers as we can.

SheKnows: Did you personally have any goals with Sanctum?

James Cameron: There is one other thing I’d like to say about that which is what did we learn. I think it’s more what we wanted to show, and for me, we wanted to show people that you don’t have to be making a $300 million movie to be able to shoot good 3D. So part of it was going in and not changing all the rules but using proven technology — maybe Alister had to solve some problems like how do I put the camera in a waterfall or how do I put it underwater but those are sort of normal filmmaking problems — but the 3D itself was not seen as a budget or schedule burden. The film was done on budget. It was done on schedule. And it was done inexpensively to the extent that I think what’s on the screen looks like it cost two to three times what we really spent. That’s really what we wanted to show. To me, it was a demonstrator. And you’ve got to remember, Sanctum was conceived four years ago. It was slowed down because of the economic collapse and our funding fell out. We had to refinance the film. But the idea when we originally conceived it was that there weren’t movies shooting in 3D. They were shooting animated films, sure, lots of them and Avatar was planned, but there was only one other title that had been shot in digital 3D at that point — The Journey to the Center of the Earth.

James Cameron: Right now I’m working on the scripts for Avatar 2 and Avatar 3 and Andrew and I are in the early stages of planning some documentary ocean projects as well.