Joan Rivers thinks Charlie Sheen is “just awful” and says he should be setting a better example for his kids. 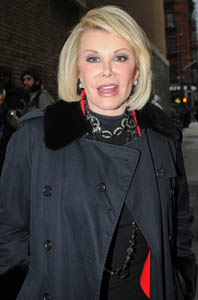 Joan Rivers is no fan of Charlie Sheen’s shenanigans. The Fashion Police host ripped the Two and a Half Men star apart in an interview with The Advocate, saying Charlie had better grow up and straighten out. Oh yeah, and he’s an ass.

“I think he’s an ass. When you have a child, darling, you’d better start setting an example,” Rivers said of the father of five.

“Childhood for you is over when you have a child,” Rivers continued. “I find it outrageous to be carrying on like that. I also think that when you get the gold ring you have an obligation. The old studio system made you have an obligation to live a clean life and be the example. What am I going to tell my grandson who watches Two and a Half Men? I just think he’s awful.”

For whom does Rivers actually have some sympathy? Zsa Zsa Gabor.