Mariah Carey and Nick Cannon are expecting a girl — and a boy! 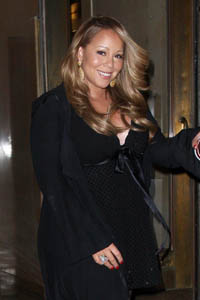 Mariah Carey and Nick Cannon revealed in December that they are expecting twins — now the couple has shared they will have a girl and a boy!

Mariah Carey told Life & Style, “Even before we announced it was twins, I was trying to keep everything gender-neutral because I didn’t want to impose an identity on them too soon.”

“There were fan contests on Twitter about what gender they are and rumors about them being two boys or two girls — but nobody guessed this!”

Of course, Mariah’s idea of “gender-neutral” involves sparkly yellow gelded unicorns, so she can keep her nursery plans.

A friend of the couple said they couldn’t be more excited. “It’s all about pink and blue these days. It’s truly going to be a dream come true for them. They get a son and daughter.”

The question is, who will become the most powerful mixed-gender twins in the biz: JLo’s Max and Emme, Angelina’s Knox and Vivienne or Mariah’s as-of-yet-unnamed little ones?

Is Mariah Carey on the verge of another breakdown?
Mariah Carey sings with mom on Christmas album