Kelsey Grammer has sent out wedding invitations before his divorce to Camille Grammer has been finalized! 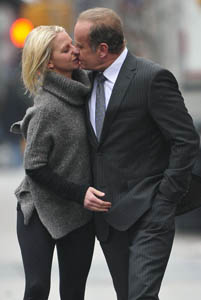 Kelsey Grammer has sent out invitations to his wedding to flight attendant Kayte Walsh scheduled for February 25 — but there is a good chance his divorce to current wife Camille Grammer won’t even be finalized yet!

Kelsey has been trying to get the divorce pushed through quickly, but a judge recently ruled he did not meet the requirements in the state of California to do so without having the property issues settled first.

Camille has already turned down an offer of $40 million and is said to be holding out for a full $50 million.

Kelsey and Kayte don’t seem to think this is a problem and have already reserved the ballroom at the Plaza for their celebration of hypocrisy, sending invitations letting their guests know to show up on February 25.

A source told the New York Post, “Despite the lavish surroundings, they want an intimate wedding with less than 150 guests. Kayte has laid out all the details, all the timings. The room will be decorated all in white, including a white cake. There will be a very tight guest list, and they won’t allow cameras in. They’re flying a lot of Kayte’s family members in from England and putting them all up at the Plaza.”

Camille said it best during her appearance on The View: “It’s a bit impetuous, don’t you think? He wants what he wants right away… It’s almost like a child.”

Of course, she also said that she and Kelsey hadn’t had sex in two years, so him trolling for other chicks shouldn’t have been that big of a surprise.