If you’ve been in a wedding party at any point in your life, the trailer for the upcoming film Bridesmaids is going to make you weep with laughter. We’ve just gotten our first look at the film written by and starring the hysterical Kristen Wiig. We’ll let you know all about her version of wedding hell.

Have you been a bridesmaid? Maid of honor? If so, you’re familiar with a very special level of hell…ahem. In the upcoming film Bridesmaids, Kristen Wiig (who also wrote the script with Annie Mumolo) plays Annie, who is asked to be the maid of honor for her friend Lillian (Maya Rudolph). She starts doing research on the Internet about what the title entails and panic sets in. 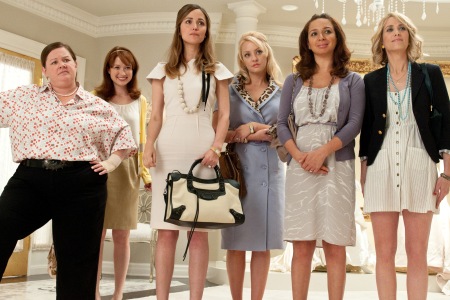 The Bridesmaids trailer has just been released and we get to see her meeting with each of her fellow bridesmaids. She meets Becca (Ellie Kemper) who, when finding out Annie is single, relives her panic at the single state. Rita (Wendi McLendon-Covey) is a bit sex-crazed, Megan (Melissa McCarthy) has the manners of a truck driver and the wealthy Helen (the surprisingly funny Rose Byrne) throws money at everything.

SheKnows actually got to visit the set a while back and these ladies rock! Not only did they all talk about what a family they became, but they wanted to make clear how wonderful it is to have a bunch of smart women running a film. Add producer Judd Apatow and director Paul Feig, who created Freaks and Geeks and you’ve got a winning combo. So what do you guys think of the trailer? Did you replay it a few times to check out the quick shot of Jon Hamm in bed with Wiig? Yeah, I did too.

Bridesmaids will hit theaters on May 13 and don’t miss our set visit interviews premiering the week of March 2.