Welcome to the Rileys stars James Gandolfini (The Sopranos) and Academy Award nominee and recent Golden Globe and SAG Award winner Melissa Leo as parents whose daughter has passed away, leaving the couple feeling empty for years. 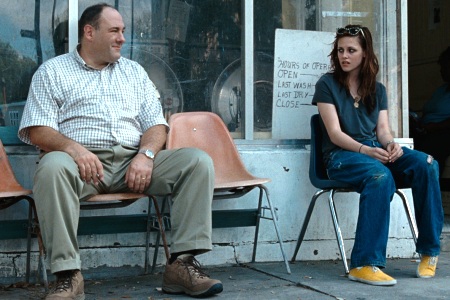 While away on business in New Orleans, Doug Riley (James Gandolfini) meets Mallory (Kristen Stewart), a runaway who is making her living as a stripper. Unbeknownst to his wife, Doug decides to take Mallory under his wing and provides her with the fatherly figure she never knew. Gandolfini’s character abandons everything he knows in order to “save” Stewart’s Mallory.

The pair immediately has chemistry and all is going well until Doug and Mallory come home to meet Lois (Melissa Leo). The delicate balance of a marriage they had before is completely threatened by the presence of Mallory and Lois’ belief that Doug is trying to replace his dead daughter with her.

Eventually, the three come together and Lois is so inspired by the new relationship in her and her husband’s lives that she is able to break down the walls that have kept her homebound since her daughter’s death.

Welcome to the Rileys premiered at the Sundance Film Festival in 2010 and arrives on home video February 1. The deeply emotional film explores what happens when three lost souls come together and somehow make a family.

It is with great pleasure that we present our exclusive video with Kristen Stewart talking about the riveting Welcome to the Rileys, which she made on break from Twilight.