Take Me Home Tonight premieres in theaters March 4, starring Anna Faris and Topher Grace, and we have your first exclusive photo from the 1980s-set film.

It’s the summer of 1988 and three friends knocking on adulthood’s door make room in their maturity for one last night of debauchery. Take Me Home Tonight stars Topher Grace as Matt Franklin, a recent MIT graduate who lacks direction even as his degree says he should be working for a global conglomerate as a rising executive star. Instead of pursuing a “real” job, Matt takes a part-time job at a video store.

It is with great pleasure that we present the exclusive premiere of the first still from Take Me Home Tonight, featuring a nicely 1980s dressed Anna Faris! 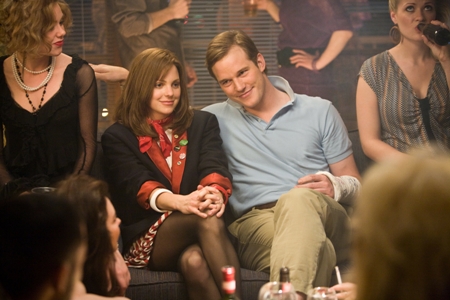 Matt’s effort to be directionless comes to a shocking stop as his high school crush, Tori Frederking (Teresa Palmer), walks into his store. What does it mean? It has to mean something, Matt thinks. When she invites him to the end-of-the-summer blowout, he has found his reason for living — a night with the coolest girl on the planet.

Meanwhile, Matt’s twin sister Wendy (Anna Faris) goes along with her brother to the party to see if her brother can finally find something that catapults him away from slackerdom and into the boardroom.

So, how does Matt’s night go? Well, it includes a marriage proposal, stealing a car and the dance-off to end all dance-offs — we’d say it sounds pretty good!