Katherine Heigl is replacing Halle Berry in the movie New Year’s Eve after the actress pulled out to focus on her custody battle with Gabriel Aubry. 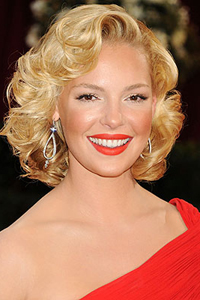 Katherine Heigl will start shooting the movie New Year’s Eve this week in New York after Halle Berry backed out of the role. Berry’s publicist said she made the decision “due to pending custody litigation involving her daughter.”

Pulling out of the Garry Marshall directed movie must have been a tough decision for Berry. The movie stars a slew of A-list actors, including Robert De Niro, Ashton Kutcher, Sarah Jessica Parker, Lea Michele, Abigail Breslin and Seth Meyers. Heigl will be playing the bitter ex-wife of Jon Bon Jovi in the movie.

Katherine Heigl was available for the part after she decided to drop out of Adeline because of the “rigorous time commitment” which would interfere with her duties as a mom. The ensemble cast of New Year’s Eve means it’s not such a big time commitment for Heigl, making it the perfect choice for her.

Berry and Gabriel Aubry broke up last May and things seemed to be going surprisingly well, with Aubry vowing to put Nahla first and stating his respect for his ex. Things took a turn for the worse when Aubry filed for sole custody of their two-and-a-half-year-old daughter, Nahla, in the U.S. and Canada. Halle Berry fired back with a petition saying that she was concerned for Nahla’s safety when she was with Aubry and she was “prepared to take all necessary steps to protect her.”

Heigl, who rose to fame in the TV medical drama Grey’s Anatomy, has proven her star power with movies like Knocked Up and The Ugly Truth (and is playing the coveted role of Stephanie Plum in One for the Money) and has lucked out with this turn of events.

Read on for more Katherine Heigl