Stephen King fans, listen up! Another one of your favorite author’s books is going to hit the big screen: The Stand! King’s 1978 novel was turned into a miniseries in 1994, but this is big news as now the classic is hitting the silver screen. 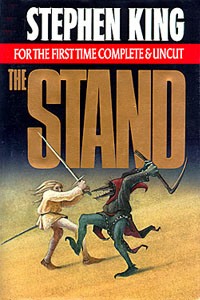 You kept the lights on all night while you read the book. (Maybe you even put it in the freezer a la Joey from Friends.) You watched the miniseries starring Gary Sinise and Molly Ringwald. Maybe you’ve even read the comics by Marvel. (Come on, my geek sisters! Let me know you’re out there!)

The Stephen King 1978 novel, The Stand, was one of the front runners of modern post-apocalyptic stories. According to The Hollywood Reporter, The Stand is about to get a brand new incarnation on the big screen. CBS and Warner Bros. are teaming up to adapt the novel into film form. Or films. A multi-film arc is a possibility.

And yes, Stephen King will be involved in some capacity. If you haven’t read it, The Stand is the story of good and evil after a virus takes out most of the U.S. population.

In fact, if you haven’t read it, fire up that Kindle and order it! (Don’t put the Kindle in the freezer though. You’ve been warned.) Can’t get enough King? Well, don’t forget the massive, unprecedented three film/two television season version of The Dark Tower which is heading your way soon.