Three-time Dancing With the Stars winner Derek Hough will not be competing for the coveted disco ball this season. Hough is teaming up with Korean pop sensation BoA for big screen romance and bootie shaking in the film Cobu 3D. 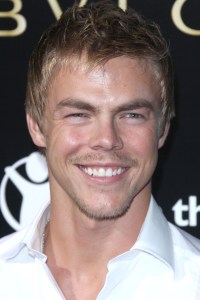 “I’m taking season 12 off,” Derek Hough told People. “I will be making it back to Dancing With the Stars in the fall. I’m just taking a little break and taking this chance to grow and expand a little bit as an artist. It’s like I told one of the producers on the show — I’ll come back with a whole new set of skills.”

While the other Dancing With the Stars pros breathe a sigh of relief at having one less serious competitor on the dance floor, Hough is preparing to take the lead with Asia’s biggest recording artist, BoA, in Cobu 3D.

With writer-director Duane Adler (Save the Last Dance and Step Up) at the helm and So You Think You Can Dance choreographers Tabitha and Napoleon on board, the Romeo and Juliet inspired dance tale centers on two dancers from rival night club families in New York City’s underground dance club scene.

New arrival Donny (Hough) falls hard for Aya (BoA) on the dance floor, only to learn of their brothers’ fierce rivalry. Aya’s funky moves are inspired by Cobu, a live rhythm performing arts group that blends Japanese traditional taiko drumming with tap dancing. The group’s motto is: “Dance like Drumming, Drum like Dancing.”

“People will see a much edgier side of me and these other styles of dance I’m capable of doing,” Hough said.

Derek Hough follows his sister Julianne in making the most of the DWTS spotlight, and the Hough siblings are proving to be quite the triple threats! Julianne Hough appeared in Burlesque and will take center stage in the upcoming remake of Footloose, but initially left DWTS to break into country music. Julianne, Derek and DWTS’ Mark Ballas also used to compete as a pop trio and the boys have continued to collaborate, though they haven’t yet found Julianne’s success.

DWTS fans don’t have to wait till fall to catch Derek Hough on TV. In March, Hough will play a dance instructor faced with his toughest students on ABC’s Better with You.

The petite dancer said he’s also been pumping up for Cobu 3D and has put on 10 pounds of new muscle, so perhaps we’ll get a peek at his new physique!

Cobu 3D is set to start shooting in New York and Toronto this spring and is expected to hit theaters in early 2012.