Christina Applegate is the proud mother of a healthy baby girl. 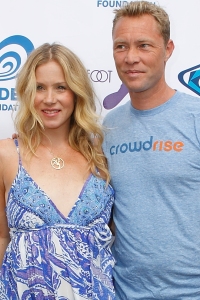 We’ve been waiting for the news since she revealed her miracle pregnancy in September and now it’s here. Christina Applegate and her fiance Martyn LeNoble welcomed their brand-new baby girl into the world on January 27 and check out the newborn’s sweet name — Sadie Grace!

The new daddy broke the news via his Facebook page on January 31, saying that Sadie Grace was born at seven pounds, eight ounces.

“I have a small but mighty support system and Martyn has really been an incredible part of my life,” Applegate once told Us Weekly. “Without him, I don’t know if I could’ve gone through any of it. He came around at a time when there was a lot of loss in my life on many levels, so he’s been a really incredible help.”

Are there more kids in the future for Christina Applegate? She did tell Us Weekly, “Babies, lots of babies. Not lots of babies, but a couple.”

Congratulations go out to Christina Applegate and Martyn LeNoble on the birth of Sadie Grace.