Halle Berry has pulled out of a movie to prepare for a massive custody battle with Gabriel Aubry. 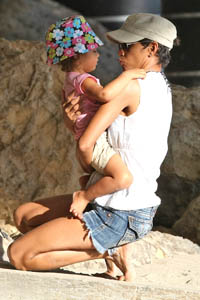 Halle Berry was supposed to start filming the movie New Year’s Eve in New York next week, but pulled out to prep for what’s shaping up to be a huge custody battle with baby daddy Gabriel Aubry.

“Halle has serious concerns for her daughter’s well-being while in the care of her father for any extended period of time and is prepared to take all necessary steps to protect her,” the actress’ rep told People.

“She has attempted to resolve these custody issues amicably with her daughter’s father, Gabriel Aubry, directly, but given his lack of cooperation, Halle has no choice but to seek swift judicial intervention.”

“Halle has always made the needs and safety of her daughter her first priority and, both while Halle and Gabriel were a couple and since their break-up, Halle has only acted in her daughter’s best interest,” said her rep.

Apparently Halle Berry thinks Gabriel Aubry has not. Round one has begun.