Charlie Sheen has refused to enter a rehab facility, forcing his loved ones to bring help into his home. 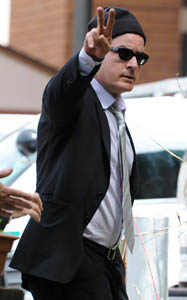 Charlie Sheen did not enter rehab as his reps claim but instead is receiving treatment at his LA mansion, says a source close to the situation.

Why the change? Charlie said hell no, he won’t go.

“Charlie was supposed to go to a rehab facility but he absolutely refused to go,” said an insider. “He is at home now and those close to him are trying to get him to enter a facility, but he doesn’t think he has a problem.”

Sources close to the actor say that as a compromise, CBS and Warner Bros — who have the biggest financial stake in Charlie’s health — found an addiction expert who has agreed to treat Charlie in his own home.

The harsh fact is that Charlie will have to cut certain people out of his life entirely, including his assistant Rick Calamaro. The Hollywood nightclub fixture has been partying with Charlie for decades and disappeared when Charlie was sober, during his courtship with Denise Richards. He came back into Charlie’s life last summer, and the actor’s misbehavior ramped up again.

“This is intervention time,” said another friend. “Charlie doesn’t think he needs help, he is still up until all hours of the night and is refusing to get it at an outside facility, all while those close to him — including his dad Martin, family, friends and his employers CBS — work to convince him he needs to enter a facility.”

Another familiar face is supporting Charlie — ex-wife Denise Richards. Not only was she at the hospital when medics brought him in for severe abdominal pains after a multi-day bender, she has also been seen coming and going from his gated community several times in the last few days.