The team who brought the funny in Superbad is back with a female-driven comedy from the mind of Kristen Wiig that explores the world of Bridesmaids. 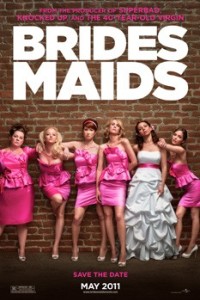 Bridesmaids is produced by Judd Apatow, the executive producer of Superbad, The 40-Year-Old Virgin and Knocked Up.

Apatow had said that he wanted to craft a comedy with the same sense of humor as his other films, but geared squarely at women and the unique view they bring. He has found it in Bridesmaids with the perfect director for the project, Paul Feig. Feig’s credits speak to the match made in heaven that is his tackling of Bridesmaids. Feig previously directed a slew of Nurse Jackie and The Office episodes as well as serving as a writer and show creator for Freaks and Geeks.

Feig’s Bridesmaids is the comedic tale of a woman who is getting married and has gathered her group of friends from across her lifetime.

The humor arises in the mismatched and forced friendships that weekend weddings inspire. Here are these people from various walks of life who only share one thing in common — the bride.

SheKnows was on the set of Bridesmaids and based just solely on the scene we saw filmed, the film looks hilarious.

Kristen Wiig wrote the screenplay with her writing partner, Annie Mumolo, and the film stars a who’s-who of female comic geniuses, circa 2011. Bridesmaids stars Wiig, Maya Rudolph, Rose Byrne (Get Him to the Greek), Melissa McCarthy (Mike and Molly), Ellie Kemper (The Office), Wendi McLendon-Covey (Reno 911), as well as the always fantastic Jill Clayburgh, in one of her last movie roles.

Universal has premiered the poster for Bridesmaids (photo above right) and look for SheKnows to bring you everything from the world of Bridesmaids including our elite set visit and interviews from the entire cast!

Bridesmaids arrives in theaters May 13.