Prince William and Kate Middleton may travel to North America as their first official overseas tour as husband and wife. 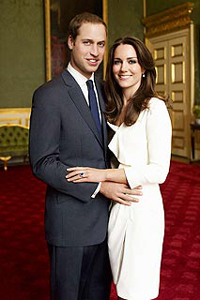 A report in The Sun says that Prince William and Kate Middleton will visit Canada as their first official foreign tour together. “It is being viewed as a major tour and the first chance people will have to judge if William has chosen his wife wisely,” a source reports.

Prince William and Kate Middleton will reportedly make a two-week visit in July and will start on Canada’s East coast and will end their visit in British Columbia. A source says that Canada was “a natural choice” as the newlyweds’ first stop because the Queen is Head of State and the royal family is well liked in the country.

Prince William, 28, is overseeing their itinerary to ensure that it doesn’t “overwhelm” 29-year-old Middleton, who must do one solo engagement.

Making foreign trips is expected of the newly married couple as they are representatives of the British monarchy. The prince’s spokespeople are not yet confirming the North American trip.

In the meantime, the world anxiously waits for their royal wedding on April 29 at Westminster Abbey. Prince William and Middleton may honeymoon in the U.K., according to rumors.