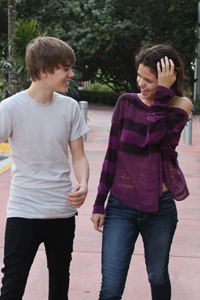 Even though pictures of Justin Bieber and Selena Gomez kissing show otherwise, Bieber told Ryan Seacrest that the Disney star is just his friend.

Seacrest asked the 16-year-old pop sensation what to tell his fans who saw him over the weekend at a movie with 18-year-old Gomez.

“Oh just tell them that she’s like one of my best friends. We saw No Strings Attached,” Bieber said.

“That’s all I need right there!” Seacrest said.

No Strings Attached, which is about a couple who are friends with benefits, is rated R — but luckily Gomez is old enough to get them both into that movie.

Bieber’s new movie, Never Say Never, will not fail to disappoint his millions of fans who can watch him in 3D February 11. “I’m looking forward to just to see me, not just the performer Justin Bieber, just me,” he told Seacrest. “I’m just a 16-year-old living the dream.”

What’s next for the busy Bieber? “I’m going on a tour in March… a world tour — Indonesia and Japan. Then we go to Australia,” he said. “At the end of the year, I’ll release another album.”