Another celebrity couple bites the dust as Eva Longoria and Tony Parker are officially divorced as of Friday. 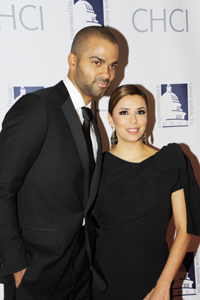 Tony Parker’s attorney filed legal papers in Texas on Friday that officially ended his three-year marriage to Desperate Housewives star Eva Longoria. The actress originally filed divorce papers in LA back in November, but her lawyer dismissed that divorce petition on Friday. TMZ reports the couple agreed to file in Texas since that is where their prenup was signed.

Longoria, 35, filed for divorce from Parker in November after she found hundreds of text messages between her husband and Erin Barry, a teammate’s wife. She also told her pal Mario Lopez that the San Antonio Spurs guard had been unfaithful to her on other occasions as well.

Despite this, Parker and Longoria have kept their split relatively friendly — and were even spotted dining together in LA.

“Just so everyone knows I still have all my tattoos! Nothing is being removed, although I am always up for more tattoos!” Longoria tweeted January 12.

Longoria, who has been recently romantically linked to Penelope Cruz’s brother, seems to be taking everything in stride. “The most important thing is to stay strong mentally, even if these are very difficult times,” she told Le Parisien.