The web is buzzing with the news that Whitney Houston might be pregnant. Is this true or just another internet rumor? 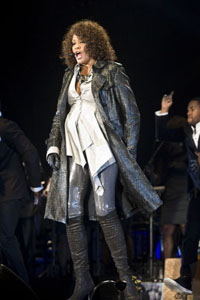 That’s the rumor circulating around the web — and at first we thought it was another Twitter hoax. But, now we’re not so sure.

A few photos of Houston sporting a tell-tale bump seem to support the rumors. However, we’re betting the mid-section weight gain is not because she has a bun in the oven.

It’s more likely that Houston has gained a little bit of weight and her outfit — matched with bad camera angles — just creates the illusion of a pregnancy bump. Besides, Houston is 47 and battled serious drug addiction in the past. Sure, women can get pregnant into their 50’s, but drug abuse likely ruined any chance of pregnancy she had left.

We’re just happy to see Houston performing and looking healthy again. Her body has taken a beating over the years and we’re hoping she’s truly beat drug addiction for good. Besides, she still has daughter Bobbi Kristina Brown, 16, at home – and all of her attention should go toward staying well and taking care of her daughter.

What do you think? Is Whitney Houston pregnant, or just getting healthy?