Anthony Hopkins scared up the number one spot at the box office this weekend with his new horror flick, The Rite. 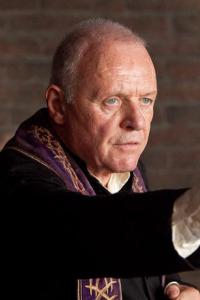 Anthony Hopkins continues to creep movie fans out with psychological thrillers long after Silence of the Lambs with his new movie The Rite. The Rite, a border-line horror movie based on exorcism, managed to top a slow weekend box office with $15 million.

The Natalie Portman and Ashton Kutcher-starring friends with benefits film, No Strings Attached, fell from last week’s number one spot to second with $13.7 million. The Mechanic and The Green Hornet went toe-to-toe with each bringing in $11.5 million.

Colin Firth and his astounding The King’s Speech, which has been gaining Academy Award momentum around the awards circuit lately (it won the 2011 SAG Award for best ensemble), rounded out the top five with $11.1 million.

The other big Academy Award nominated film with ten nods, True Grit, came in at the number six spot with $7.6 million. True Grit’s total box-office sales are valued at an estimated $148 million. Vince Vaughn’s comedy, The Dilemma, followed behind with $5.5 million. Black Swan took the number eight spot with $5.1 million just ahead of Mark Wahlberg’s boxing film, The Fighter, which brought in $4.1 million. Yogi Bear rounded out the top ten, sliding in with $3.1 million.

Much of the films on this weekend’s box-office list, including True Grit and The King’s Speech, are heading into Oscar-land and we can’t help but wonder if we’ll see a spike in sales as moviegoers that haven’t seen the films try to see what all the buzz is about.