New Kids on the Block shy guy Jonathan Knight has said for the first time publicly that he’s gay — despite the fact that friends and family have known for years. 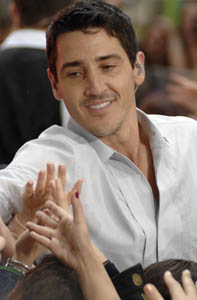 After being publicly outed by Tiffany in a TV interview, Jonathan Knight felt he had to address his sexuality to his fans — even though it was an open secret everyone around him already knew.

In a statement on the NKOTB official website he released a statement full of a lot of exclamation points! Jonathan Knight addressed the subject and frankly gets rather pissy about it.

“I have never been outed by anyone but myself! I did so almost twenty years ago. I never knew that I would have to do it all over again publicly just because I reunited with NKOTB! I have lived my life very openly and have never hidden the fact that I am gay! Apparently the pre requisite to being a gay public figure is to appear on the cover of a magazine with the caption ‘I am gay.’ I apologize for not doing so if this is what was expected! My belief is that you live your life by example, and not by a caption on a magazine! If there ever has been any confusion about my sexuality, then you are someone that doesn’t even know me!

“I love living my life being open and honest, but at this time I choose not to discuss my private life any further! My fellow band members don’t discuss their private lives with their loved ones and I don’t feel that just because I am gay, I should have to discuss mine!”

Oh, and PS? Lay off Tiffany.

“I’d also appreciate it if the people talking trash about Tiffany and Deborah knock it off and stop being nasty!” Jonathan Knight tweeted.