David Arquette has left rehab after a month of treatment for alcohol abuse. 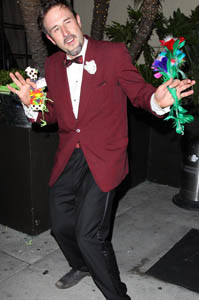 David Arquette has left rehab after 30 days of treatment for what his rep called “alcohol and other issues.”

The actor checked himself into rehab over New Year’s weekend for vague reasons that his rep says have nothing to do with drugs, but obviously had everything to do with him getting wasted, giving highly inappropriate interviews about his split from Courteney Cox to Howard Stern and sleeping around.

It appears Arquette is serious about his new sober life, even going so far as to cut ties with business partner Jeff Beacher. The two collaborated on the Beacher’s Madhouse theater show at the Roosevelt Hotel, a booze-soaked venue featuring flying midget bartenders that thus far had only done private shows while gearing up for a public opening in February.

“David and Jeff have dissolved their partnership,” a rep for the 39-year-old told RadarOnline.

“David remains a big fan of the Beacher’s Madhouse Show and the Roosevelt Hotel, (but) he is concentrating on his health and well being right now.”

The status of the show without Arquette is unknown, but this turning point may bode well for his relationship with Cox. She said in an interview after the couple announced their separation that no one was talking divorce yet — perhaps Arquette just needed to get his act together.