Justin Bieber’s unbelievable life story hits the big screen February 11 when Never Say Never premieres nationwide. We have been given an early look at the film and let’s just say this: It’s a classic Horatio Alger story with a booming soundtrack. Not just for kids and teens, but their parents too — anyone who loves music and a good old fashioned success story is in for a treat.

Bieber famously grew up in a small town in Canada with an exemplary amount of talent. In Never Say Never, early home movies show the young Justin Bieber learning the drums from a neighbor and thus audiences see the first inkling that this kid is something truly special. Barely four years old and he is already jamming on a drum kit as good as a 20-year-old with years of experience.

Then, he figures out he can sing and the rest is history. 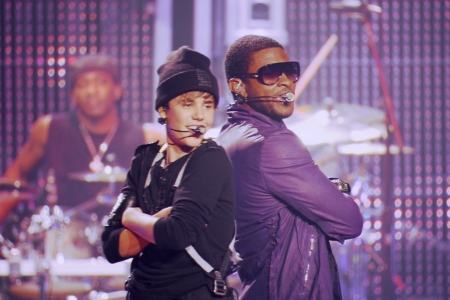 Through Never Say Never, expertly directed by Jon Chu, audiences get to see a side of superstardom that is rarely captured on film. The film tells his tale, but it also grabs the audience by letting us know what the big finale is early on — Justin Bieber is set to play New York City’s Madison Square Garden, the most famous arena in the world. It is often repeated throughout the film that an artist hasn’t truly “made it” until they have sold out Madison Square Garden.

What we don’t know and can’t comprehend until the film beautifully lays it out for us, is how difficult the demands of fame are on a young boy who literally came out of nowhere to take over pop music.

Another feeling I was left with after leaving the film was how even when it seems so, there is no such thing as an overnight sensation in our culture.

Sure, we know the famous story of him being discovered on YouTube. But what many don’t know is that once he had songs for radio to play, none would. He was too young. He was too unknown. There is no platform for a young teenager to seek out pop stardom in the vein that Bieber was going after with his mentor Usher. But to become the superstar he is, it required him to literally meet every DJ he could and play for them. Bieber visited cities across North America in a full-fledged endeavor to get his songs played.

Then…Bieber discovered Twitter. He would tweet what radio station he was visiting and ever so quickly, the hundreds that gathered to meet him swelled into tens of thousands. Then, radio figured they might want to play this kid!

We don’t want to give away too much of the utter joy of seeing Never Say Never and our review is coming the week of release (February 11), but this much can be offered: If there’s another screening of the film coming up, count us in! Never Say Never is pure joy, an inspirational piece of filmmaking that shows that regardless of age or where you were born, if you dream it, it can happen and above all — Never Say Never.

Exclusive: Why the Queen Won’t Cut Ties With Meghan Markle Like She Did With Princess Diana