Tracy Morgan is a comedian, and comedians routinely get in trouble for what they say. Well, Morgan just made a comment about Sarah Palin while on Inside the NBA that made TNT feel the need to publicly apologize. We promise, it will make you squirm. 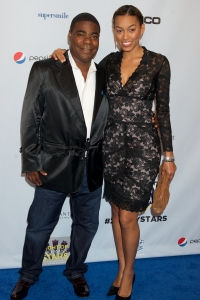 We often hear comics and stand-ups saying things that no one else would get away with. Late night talk show hosts do it all the time. Well, comedian Tracy Morgan just made a comment about Sarah Palin (well, who hasn’t) that got him in a bit of hot water.

Ahem. Well, you hand a comedian a set-up like that, especially one like Morgan…what did Barkley expect him to say? “Oh, that Mrs. Palin is a lovely example of womanhood.” Well, TNT apparently felt just as icky about that statement as you’re feeling right this very moment. In a statement to The Hollywood Reporter, a TNT spokesperson said, “It’s unfortunate Mr. Morgan showed a lack of judgment on our air with his inappropriate comments.”

What do you think? Should TNT have apologized for the comment? Can comedians say whatever they want? Are you just too grossed out to form an opinion? Let us know.