Britney Spears’ Hold It Against Me debuted at the top of the Billboard Hot 100 and it was a short run at the top as Bruno Mars took the top spot this week with his hit Grenade. 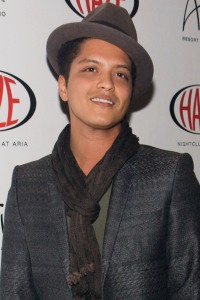 This is not the first time the Bruno Mars hit Grenade has rated as the nation’s number one song. It is actually the third time the hit song has topped the charts, just not in consecutive weeks.

Britney Spears shouldn’t be hanging her head too low, she’s still at number five and also scored a rarity in pop music: Hold It Against Me is only the eighteenth song to debut at number one!

As Spears fell to fifth, Katy Perry took her Firework and rose from three to two. Perhaps Firework will take the top spot next week and follow Mars’ trend — it has been a number one previously as well. With the Super Bowl fresh on people’s minds, a track that salutes the Pittsburgh Steelers took the third spot on the chart — Wiz Khalifa’s Black and Yellow.

Enrique Iglesias proves that his I Like It was no fluke as his second single, Tonight (I’m Loving You) featuring Ludacris, landed at number four. Ke$ha’s first single off her new album, We R Who We R, held firm at number seven while Rihanna arrived just above at number six with What’s My Name featuring Drake.

The top 10 closes out this week with Pink’s Raise Your Glass, the Black Eyed Peas’ The Time (Dirty Bit) and T-Pain and Pitbull’s dancehall anthem Hey Baby (Drop It to the Floor).

Could a Justin Bieber track be making its way back up the charts with the upcoming release of his movie? Without a doubt that will happen as the title track from his Never Say Never movie has reemerged on the Hot 100 at number 85. Look for the track to move even higher as the Bieber biography-concert film hits theaters February 11.