The CW has decided to push back the return of Supernatural and Smallville, but don’t worry, you only have to wait a week. 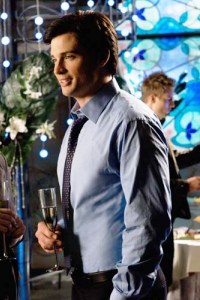 If you’ve been sitting on pins and needles, waiting in anticipation for the return of Supernatural and Smallville, you’ll have to wait a little longer. The CW has pushed the return of both shows back a week.

Supernatural and Smallville hold their own on the CW line-up, so why the hold-out? According to reports, it’s a combination of American Idol and good old preemptions.

The CW launched the return of The Vampire Diaries and Nikita Thursday night against ratings giant American Idol but the network didn’t get to put its best foot forward in regards to the viewers due to a few snags. A rep for the CW released the following statement: “The network wanted a chance to repeat tonight’s return of Vampire Diaries and Nikita on Friday to give their midseason debuts some additional sampling. Diaries, in particular, is going up against Idol.”

Local preemptions in markets like Chicago caused the returns to be missed, so the repeat episodes will be a bit more of a proper ratings gauge. There you have it — if you were worried you missed two of the biggest CW returns, have no fear, you can catch the reruns on January 28 without missing Supernatural or Smallville’s return on February 4.

Can you wait a week for the return of Supernatural and Smallville? Did you freak out when you turned your TV on and saw something other than hunky vampire Damon Salvatore? We know we did!