Kristen Stewart has played a girl in love with a vampire and a werewolf. She’s played a rock star. Now, Stewart is currently filming The Twilight Saga: Breaking Dawn where she’s preggers with a vampire baby. Where is the next logical place to take her career? Fairy tales, of course! Rumors have Stewart circling the role of Snow White. No, we’re not kidding. 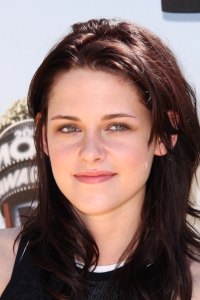 I bet you wish we were kidding. Kristen Stewart is many things, but fairy tale princess isn’t one of them. It’s still a rumor, but it’s a pretty darn creepy one.

In this retelling of the story, Snow White and the Huntsman, the Huntsman is possibly being played by Viggo Mortensen, who feels sorry for Snow White and tries to help her. Now, I’m just guessing here, but that sort of feels like a set up for a hook-up. Ick. Now don’t get me wrong. Viggo is hotter than hot, and I’d love to see him in another costume drama, but he’s 52 and she’s 20. Thirty-five-year-old Charlize Theron is up to play the evil stepmother.

Does this seem odd to anyone else? I could be wrong about the hook-up thing, of course, but still, Stewart hardly seems like the Snow White I remember. Well, she’s not alone in being considered for the role. She’s up against Riley Keough, Felicity Jones, Alicia Vikander and Emily Browning.

Personally, I’d vote for Browning. After checking out the set of her upcoming film with Zack Snyder, Suckerpunch, and seeing her in action, I’d say she’s perfect. Now, I know you want to weigh in here.

What do you guys think of Kristen Stewart as Snow White? Do you think she’s a great fit? Are you horrified at what Hollywood might do to your childhood memories? Will you watch it only if Taylor Lautner and Robert Pattinson agree to play dwarves? Let us know!

Read on for more Kristen STewart