Big screen funnyman Will Ferrell is taking the laughs to NBC’s The Office for a four-episode arc! The dates haven’t been announced yet, but Ferrell will once again appear on screen with Steve Carell, his costar in Anchorman: The Legend of Ron Burgundy.

On the heels of news that Ricky Gervais will make a cameo on The Office comes even bigger news: Will Ferrell has signed on for more than just a smile and a nod. He’s committed to appear in four episodes as a branch manager who arrives from the home office and proves to be just as inappropriate as Michael Scott. 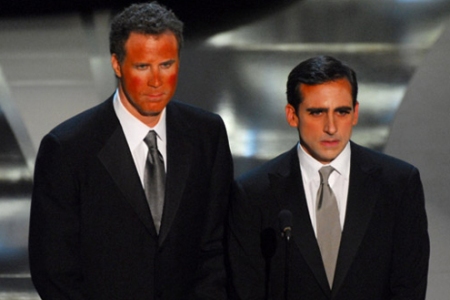 “We found Steve Carell when he was nothing but a movie star and we turned him into a television star,” said exec producer Paul Lieberstein. “We are proud to continue The Office’s tradition of discovering famous talent, and we hope that once America gets a good look at Will, they’ll see what we see: tremendous raw sexuality.”

Ferrell’s airdates haven’t yet been released, but he will be reunited with his Anchorman: The Legend of Ron Burgundy costar Steve Carell. That means Ferrell’s visit will have to happen before Carell’s mid-April exit.

There’s been much chatter about who might replace Carell’s Michael, not to mention how the show will survive without him. Ferrell offered his services to The Office to help smooth the transition and keep ratings up, and will stick around for at least one episode after Carell’s exit.

It’s doubtful Ferrell will land the job of top boss in Scranton, but his run on The Office could play into the hunt for Michael’s replacement.

If Ferrell delivers and has a good time, The Office would be wise to try to keep him around. Ferrell, however, has quite a bit on his plate already. In addition to his onscreen antics, Ferrell is executive producer of HBO’s comedy series Eastbound & Down and Funny or Die Presents, and along with his partner Adam McKay, launched the hysterical website Funny or Die.

Stay tuned for the airdates for his The Office temp gig.