It’s official, 10-year-old Willow Smith is going to be morphing into little orphan Annie for a movie remake of the classic musical Annie. 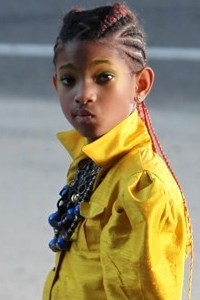 Willow Smith has been officially confirmed to take on the role of Annie in a remake of the popular musical Annie. The sun will surely be coming out for the pint-sized daughter of Will Smith and Jada Pinkett-Smith!

Smith rocked the world with the catchy hit Whip My Hair and for such a young girl she’s been keeping up with the success quite well. Her latest venture, which was confirmed by Billboard.com, teams Willow Smith up with her parents and their partners at Overbrook Entertainment along with another big-name star who will produce — Jay-Z.

Jay-Z, who also owns Willow Smith’s music label Roc Nation, will act as a producer for Annie and provide the music as well.

Jay-Z released the following statement in regards to his partnership with the movie: “The Overbrook Entertainment family and I have a unified vision. We’ve already produced a Tony Award-winning play [Fela!] and we’re developing a true superstar in Willow. This venture into film development and production is a perfect next step with teams that are accomplished, creative and innovative.”

Do you think Willow Smith is the right fit for Annie or should she stick to cranking out hot beats?

57 mins ago
by Sara Kitnick