Jennifer Aniston says she is not adopting a baby, despite the claims of a tabloid story. 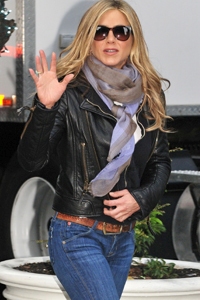 Star Magazine said Jennifer Aniston is about to adopt a baby from Mexico, but the star’s rep reported it just ain’t true.

According to Jezebel.com, “Jen has already signed papers to adopt a child, and the kid will be in her arms by her 42nd birthday on February 11th… Jen already has a gender-neutral nursery in her Beverly Hills home, with a Harry Potter mural on the ceiling.”

Cute, right? Too bad it isn’t true, according to Jen’s rep.

“It is completely false,” her rep told People. “Jennifer is not adopting a baby from Mexico, nor does she have a nursery in her home and she has not hired a nanny. It is all a work of fiction.”

Of course, her rep does have a history of lying to the press about some pretty important details of her life, including saying she and Vince Vaughn weren’t engaged when they were and that she wasn’t dating John Mayer when she was.

File this one under “wait and see.”

read on for more jennifer aniston