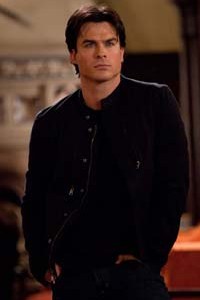 It’s been an agonizing holiday break waiting for The Vampire Diaries to return but wasn’t the CW’s week-long marathon a nice distraction?

This week, The Vampire Diaries‘ drama picks up right where it left off with The Descent.

If you forgot, and we know you didn’t, Rose thought she was out of the woods from the disastrous run-in with the werewolf that hit town — but it turns out she’s not. Stefan (Paul Wesley) found himself in his own predicament after managing to get himself trapped in the tomb with Katherine (Nina Dobrev) — but don’t worry, Elena (also Nina Dobrev) negotiated his release with Elijah so he’s now free to brood over Elena’s plans to protect her family and friends from the outside.

The Descent features Damon’s (Ian Somerhalder) search to cure Rose of the werewolf bite while Elena plays nurse to the ailing female vampire. But watch out, the bonding could turn dark.

Meanwhile, Caroline (Candice Accola) and Matt (Zach Roerig) try to work through their feelings while Tyler (Michael Trevino) hangs in the background trying to process Caroline’s willingness to help him.

Vampire Diaries goes on a Descent

Check out the clip below of The Vampire Diaries’ all-new episode, The Descent. Do you think Rose is on her way out, and here’s a thought, is anyone dying to see a Lexie return?