Singer Jimmy Buffett is recovering from a nasty spill off a Sydney, Australia, stage Wednesday night. Read on to learn the latest on Buffett’s condition. 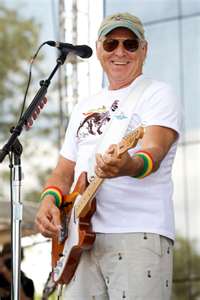 Margaritaville singer Jimmy Buffett is “doing well” after falling off stage during a performance in Sydney, Australia on Jan. 26.

Buffett was in the middle of playing Lovely Cruise when he took the dive off the stage, severely injuring his head.

“We were in the 10th row, and it looked like he did a massive face-plant after his encore and pretty much didn’t get up,” concertgoer Dan Bateman told the Daily Telegraph. “We were told to leave the premises. No one really wanted to leave because everyone was anxious to know if he survived the fall. Everyone was pretty horrified.”

Fans were told to leave the pavillion soon after an unconscious Buffett was rushed to an area hospital.

Don’t worry, Parrotheads — Buffett is said to be recovering and will leave the hospital soon.

“As you probably already know, Jimmy had an accident while performing in Sydney last night and was taken to the hospital,” a note on his website says. “The doctors say he is doing well and will be released tomorrow. More info as we get it, and thank you for all of your well-wishes!”

The accident was an unfortunate introduction to Buffett’s first performances in the country in over two decades. The concert — held to celebrate Australia Day — was reportedly filled with tributes to the country.