For many actors, there is no pinnacle beyond receiving an Oscar nod and this year, The Social Network star Jesse Eisenberg is up for Best Actor. “A very strange experience,” Eisenberg told the LA Times. “The movie has received such high praise for the last several months. This is just another overwhelming culmination. In many ways this is a culmination.” 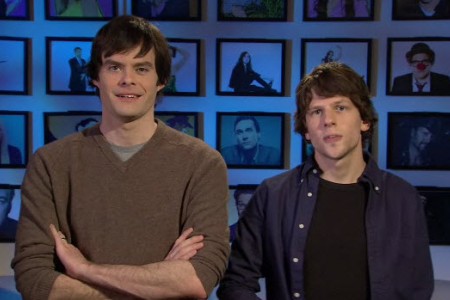 There is, however, another very different pinnacle for actors: Being invited to host Saturday Night Live!

On the heels of getting nominations for his portrayal of Facebook founder Mark Zuckerberg, Eisenberg is set to host SNL this weekend, with rapper and R&B singer-songwriter Nicki Minaj on board as the musical guest.

Eisenberg expects that his visit to SNL “might be funnier” than the movie that got him all this attention and who knows, he might just be more excited about this big honor than the Oscar nominations, which seemed to make him uncomfortable.

Whatever Eisenberg’s thoughts on his hosting gig, we won’t find them on Facebook. Back when The Social Network came out, he revealed he’s not a Facebooker. He also recently quipped, “All of us are banned from that Web site.”

In the promos for this weekend’s SNL, Bill Hader teases Eisenberg for seeming to be as socially awkward as Zuckerberg. Then the guys have a conversation about what Oscar’s famous “nod” actually looks like.

The Facebook and Oscar jokes are sure to work their way into a sketch or two Saturday night on NBC. In the meantime, check out the SNL promo here on SheKnows: