In this day and age, it was not surprising that Prince William and Kate Middleton announced their engagement via the Internet. The Queen of England faxing out save-the-dates for April 29 seems a little strange, but Evite does seem a bit lowbrow for the royals. 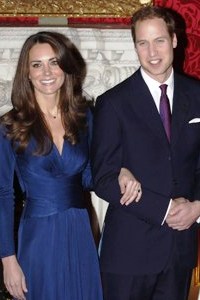 Queen Elizabeth joined the modern age last year with Facebook and Flickr pages and Twitter’s @BritishMonarchy has over 99,000 followers; but the royal wedding save-the-date shout-out was only for the elite.

If you didn’t get your fax, you may still be in the running. With the guest list still being paired down, 1,800 handwritten, gold-embossed invites will go out to the rest of the wedding riffraff later, but with a big event like the crown prince’s wedding, it’s important to get the date out to the rest of the royal court early.

“The Lord Chamberlain’s office does give a heads-up to royal families first, in line with protocol,” a St. James’s Palace aide told the Daily Mail.

To that end, Buckingham Palace sent out faxes to Europe’s highest ranking royals, asking them to keep April 29 free for Prince William and Kate Middleton’s wedding.

“Faxes have been used before for large-scale events,” a Buckingham Palace courtier told the Daily Mail. “They are an efficient and polite way to inform people as quickly as possible.”

The story goes on to reveal that RSVPs for the Westminster Abbey wedding ceremony of Prince William and Kate Middleton have already come in from Greece’s King Constantine, his wife Queen Anne-Marie and their eldest son Crown Prince Pavlov; Serbia’s Crown Prince Alexander and his wife Crown Princess Katherine, and members of the Romanian monarchy. Stay tuned for word from the royals of Spain, Holland, Norway, Sweden, Denmark and Belgium.

This new round of wedding news, just a day after the announcement that Middleton quit her job, makes it appear that Prince William and Kate Middleton’s wedding plans will stay in the news until they tie the knot on April 29. Then it will be time for honeymoon sneak peeks and baby watch!