If you’re the First Lady of the United States, how do you show your support for your country at the State of the Union? Wear an American designer. Seems like a no-brainer, but it doesn’t happen as much as it should. The lovely Michelle Obama just appeared in a gorgeous Rachel Roy dress. 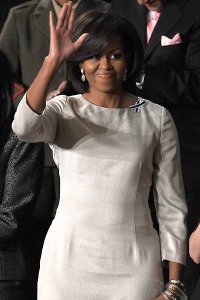 Michelle Obama looks good in anything. Seriously, she’s beautiful, she’s got guns to die for and she’s a tall drink of water. If anyone is going to give the American fashion industry an extra jolt, it should be our First Lady. Well, Michelle just gave American designer Rachel Roy a late Christmas present by wearing one of her designs to the State of the Union speech.

As you’ve all heard, Michelle got a bit of backlash for wearing a European designer’s work to the state dinner for China last week. In an interview with WWD, designer Oscar de la Renta suggested she wear a piece from one of our own designers for the State of the Union and she did — a stunning white silk dress.

Roy’s designs have been seen on Kate Hudson and (I hesitate to put Michelle in the same article as) Kim Kardashian.

So what do you think of the dress? Of course Michelle Obama can wear whatever she wants, whenever she wants to wear it — but it’s a wonderful gesture to support our own economy by wearing American. I’m curious…have you ever seen her wear something you didn’t like? I haven’t.

Let us know what you thought of that dress!

23 mins ago
by Sara Kitnick