Glee creator Ryan Murphy has some harsh words for Kings of Leon after the huge rock band turned down an invite to be featured on the hit show.

Ryan Murphy has burned his Kings of Leon CDs. The Glee creator ripped the band a new one after they turned down the opportunity to be featured on an episode of the show. 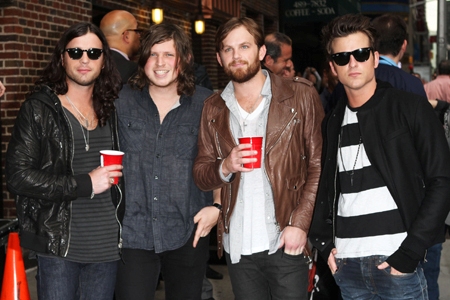 In an interview with The Hollywood Reporter, Murphy had some incredibly harsh words for the rockers.

“F–k you, Kings of Leon,” Murphy said. “They’re self-centered [expletive] and they missed the big picture.”

“They missed that a seven-year-old kid can see someone close to their age singing a Kings of Leon song,” he continued, “which will maybe make them want to join a glee club or pick up a musical instrument. It’s like, OK, hate on arts education. You can make fun of Glee all you want, but at its heart, what we really do is turn kids on to music.”

But this is all news to Kings of Leon frontman Caleb Followill.

“This whole Glee thing is a shock to us,” Followill told THR in response to Murphy’s diatribe. “It’s gotten out of hand. At the time of the request, we hadn’t even seen the show. It came at the end of that record cycle, and we were over promoting [Use Somebody]. This was never meant as a slap in the face to Glee or to music education or to fans of the show. We’re not sure where the anger is coming from.”

Murphy has a history of going ballistic on stars who dare refuse to go along with his Glee-ful plans. Last year, he called Slash “uneducated and quite stupid” after the former Guns N’ Roses guitarist called Glee “worse than Grease” for music licensing.