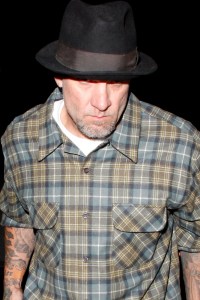 On a Facebook page created by and for ex-employees of Jesse James‘ now-shuttered West Coast Choppers, photos have surfaced showing the biker in more compromising Nazi-loving positions.

In one photo, Kat Von D’s new fiance is shown riding in a convertible with a wide grin on his face next to a Hitler-esque pal wearing a Nazi hat and giving the sieg heil salute.

His former employees don’t seem to be big fans of the man, either. Some choice comments include:

“I left a good job, working for nestle for seven years to being tortured everyday by a certain [expletive] aka our boss for almost four years. I’ll never forget what a dummy I was!!”

So in addition to being a jerk, is Jesse a skinhead?

“The swastika deal is to scare people. It’s part of biker culture,” an insider told Us Magazine. Check out the photos!